During my first few months working for IBM I had the oppurtunity to work with other IBM UX designers from all over the world at IBM's design camp. IBM divided the us all into groups of five that consisted of UX designers, UX researchers, visual designers and front-end developers. Each group was given a conceptual project to work on and deliver in three weeks time. My group was given the challenege of leveraging Watson to help struggling students in the K12 system. I found this to be a really interesting project topic due to the use of Watson, which gave us a whole range of cognitive abilities to work with. It also gave me the oppurtunity to work with a real AI system which was incredibly rewarding. To guide the team on this project we were given the following project statement;

The team began by researching as much as we could about the K12 education system and forming questions to ask in our interviews so we could validate our project statement. We found a lot of interesting and alarming data from our research. For example we found that only 66% of students get accepted into college and only 29% enter into the workforce in the major they studied. Overall we found only 11% of students really 'Make It'. Through our research we found that there are a wide range of blockers for students trying to enter college but wanted to see how much the idea of a 'misunderstood concept' affected students and if so how could it be remedied? To find this out we needed to talk to students. 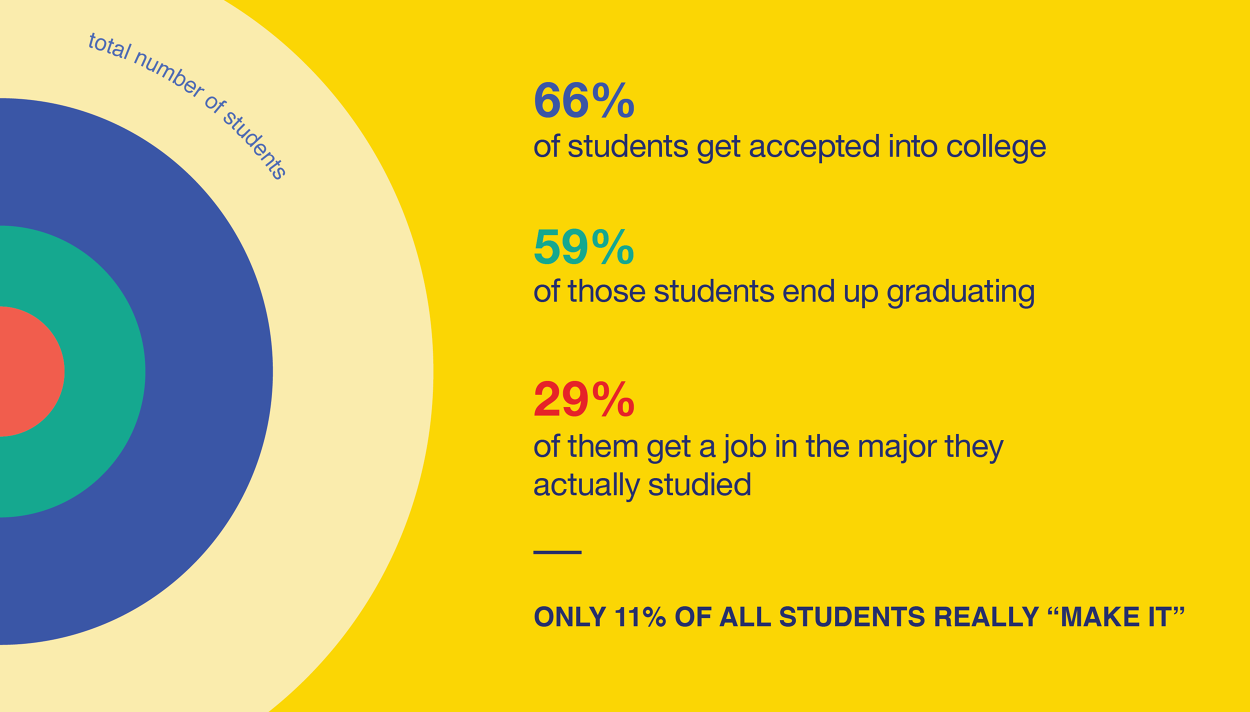 We setup over 28 interiews with students, teachers and industry experts that allowed us to examine a wide set of views. Using the research we started to build empathy maps of our users by collating it into what students are thinking, feeling, saying and doing. We also started to group similar needs and pains together to visualize what were the major problems students were facing. We focused some of our questions on 'misunderstood concepts', how students and teachers deal with them and how they affect a students progress through the school system. 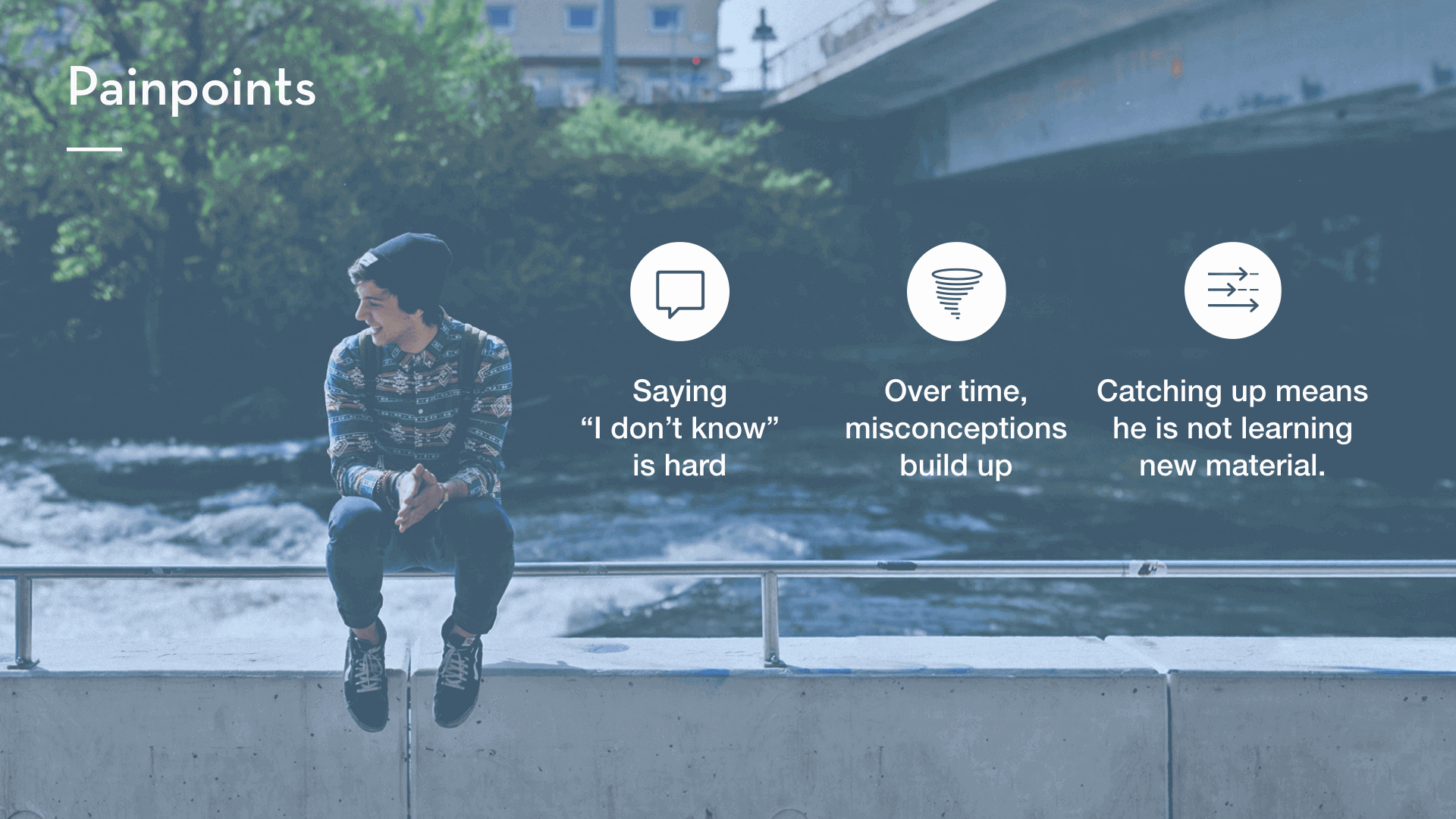 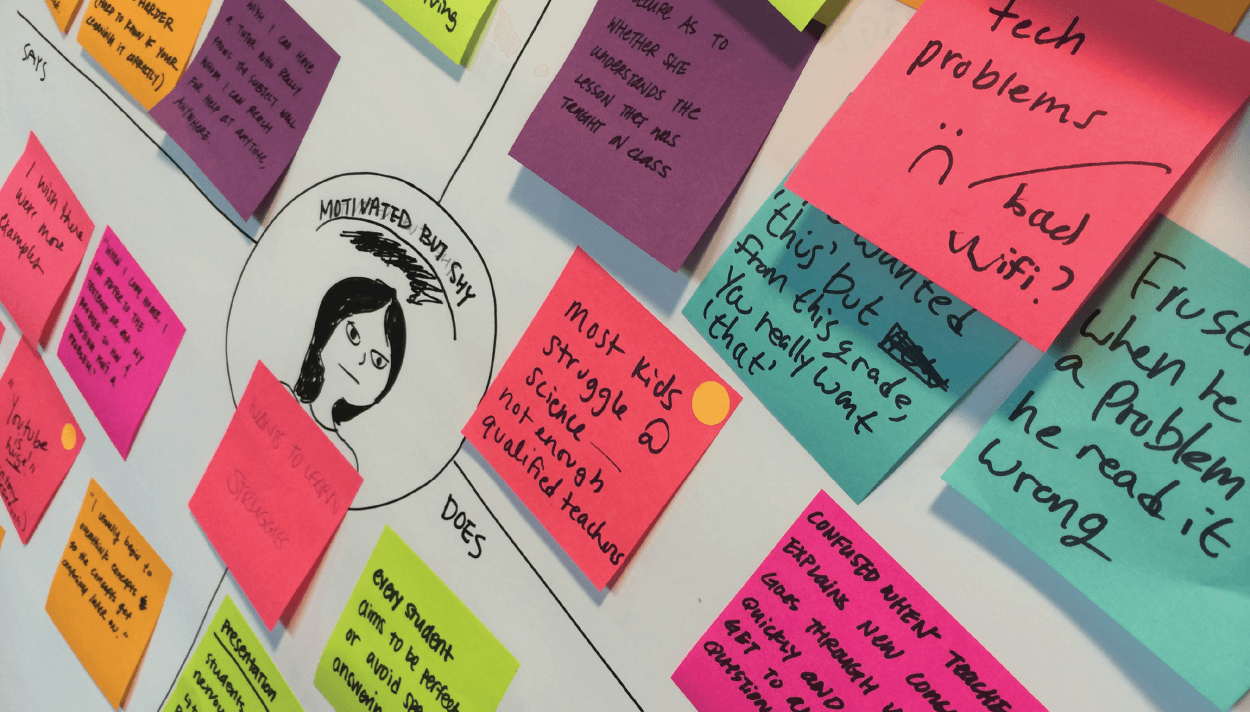 Using our research and empathy maps, we began to piece together a series of user personas. The personas were based around three user types: 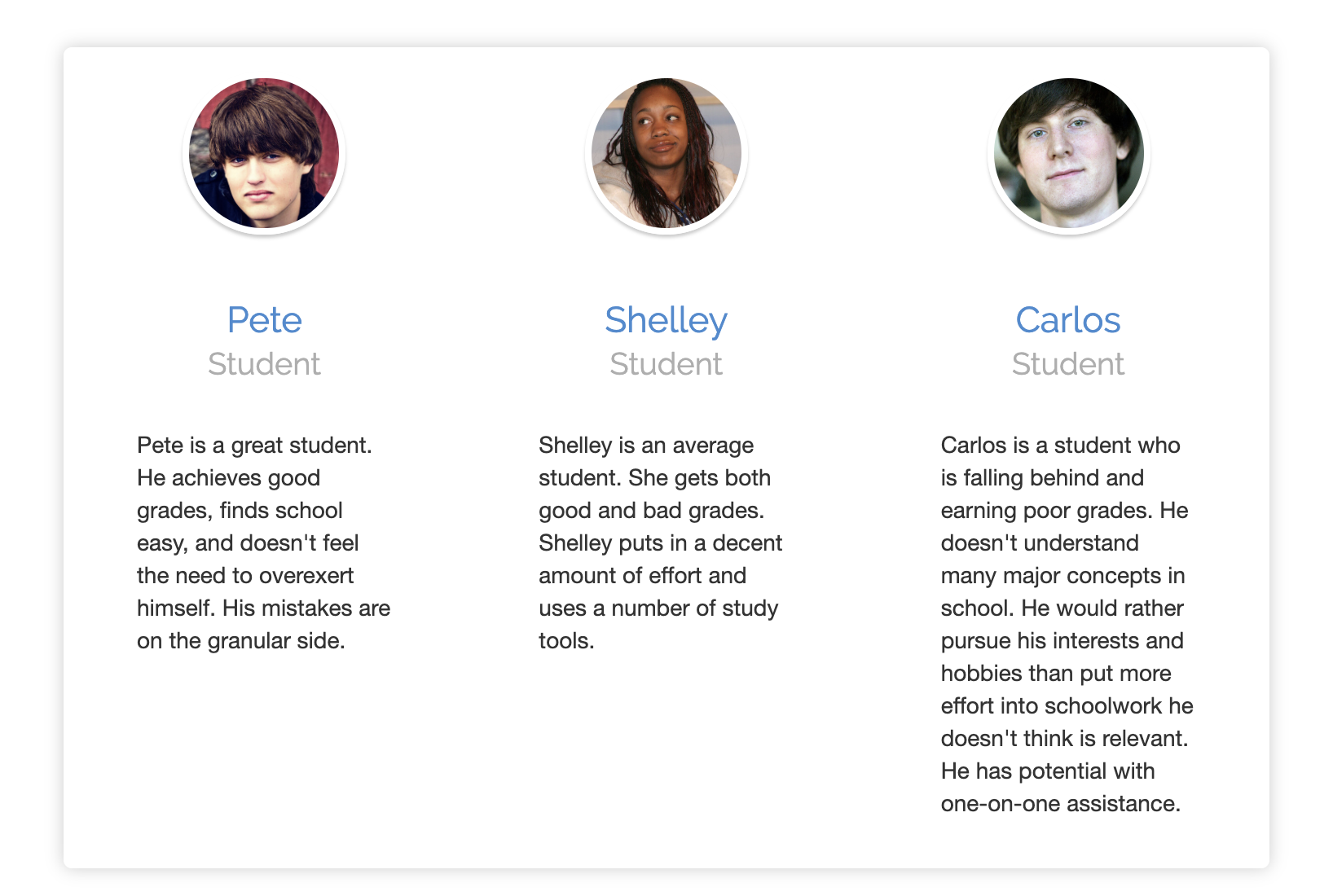 For the purpose of this project and taking into consideration our five-week deadline, we decided to focus on one persona, Carlos, for the remainder of this project. Our team felt Carlos was the most vulnerable persona, and that by leveraging Watson, we could halt the snowball effect and prevent him from being lost in the system. We began analyzing Carlos' day to see if we could uncover more insights into why he wasn't as engaged as other students. Using our research and interviews, we created a mood map to see where students like Carlos were struggling the most. 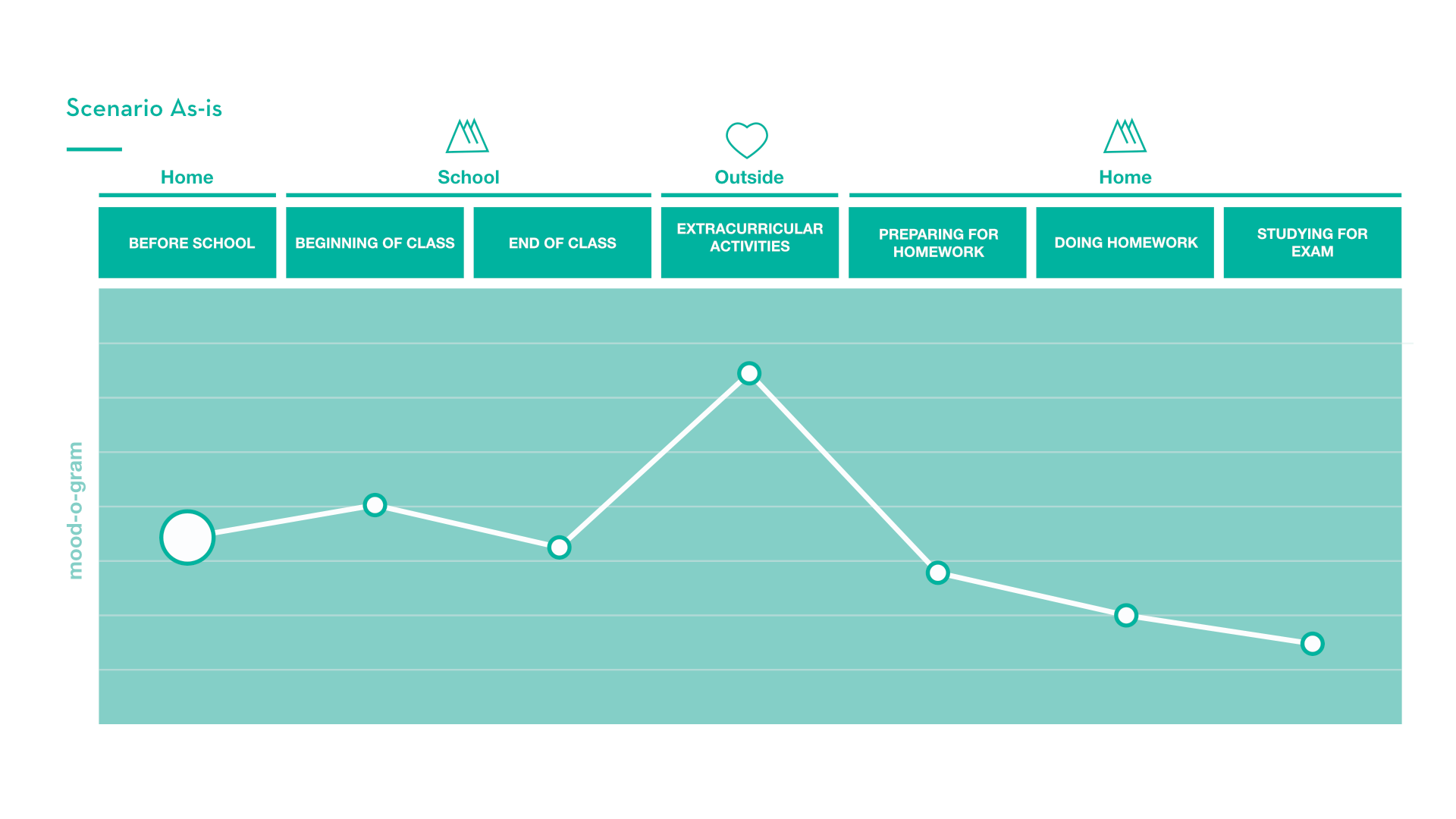 We discovered that students like Carlos struggle the most at home when they try to study and do homework. Even if they are not particularly enthusiastic about school, these students can still rely on their friends during the day for guidance. But at home, they feel isolated and have a lot less support.

With an understanding of where and when Carlos struggles, we began to think about how our product could help Carlos succeed. Based on our research and with the guidance of our stakeholders, we developed four principles for Watson to follow for our product to succeed:

1. Supportive Watson enhances my current practices. It doesn’t replace them.

2. Personalized Watson knows me and adapts to my needs and preferences.

3. Liberating Watson makes me feel empowered so I can be in control of my learning.

4. Purposeful Watson explains why, not just how. I need to feel like what I’m learning matters.

We also coordinated with our stakeholders to update our project objectives to better convey our goals after our research phase.

Our goal now was to create an application that could provide a struggling student with a personalized learning experience: one which would be dynamic, tailored to their personality, and can help stop the snowball effect.

With much of our ground research completed, our attention turned to Watson and the features and capabilities we could leverage in our application. The Watson AI contains many different APIs mainly focused on speech and natural language processing. This allowed us to consider more unconventional options when approaching the design of the application. We decided we could make the human-to-AI interaction more fluid and harness machine learning and personality insights to engage Carlos more than a regular application would.

Our initial concepts for the application were based on using Watson Analytics to process problems like math or geography and then using personality insights and natural language to tailor and present it to the user. We ended up implementing eleven Watson features, including Speech-to-text, Text-to-speech, Natural Language, Personality Insights, and Analytics. We felt that these would follow the principles we outlined and provide a more personalized and unique experience for the user. 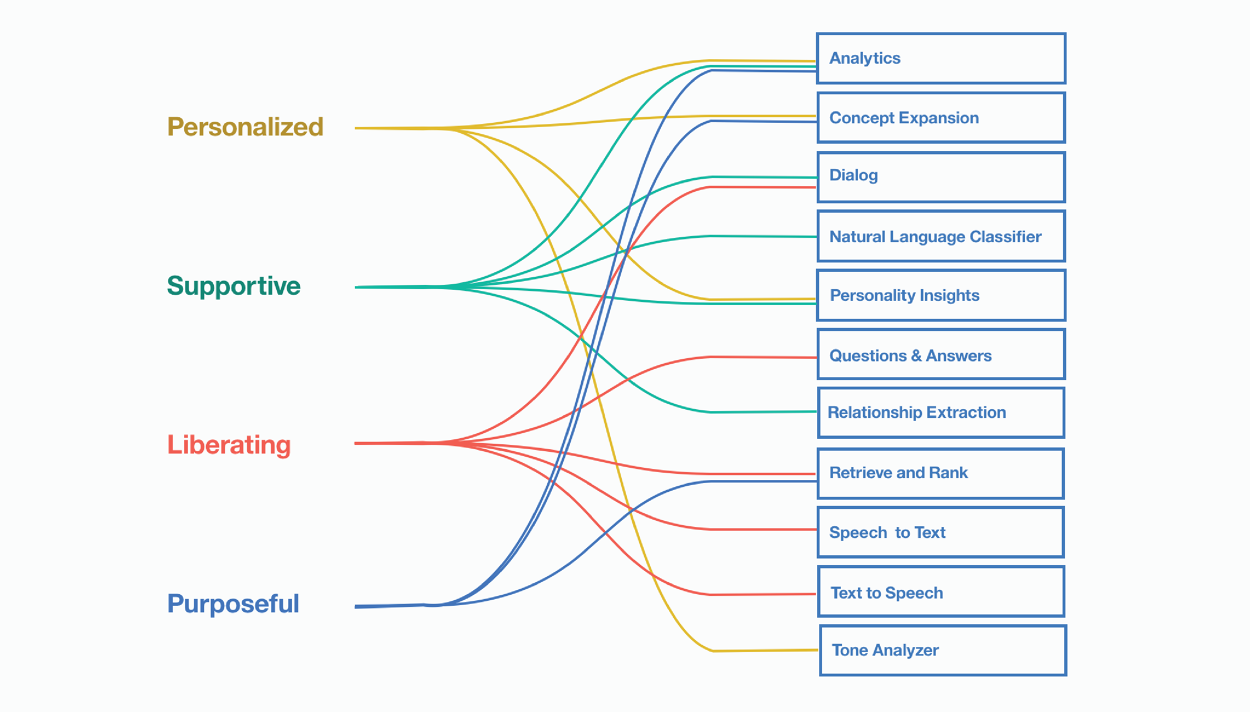 Using our design principles to identify which Watson capabilities would have the best impact on our users. 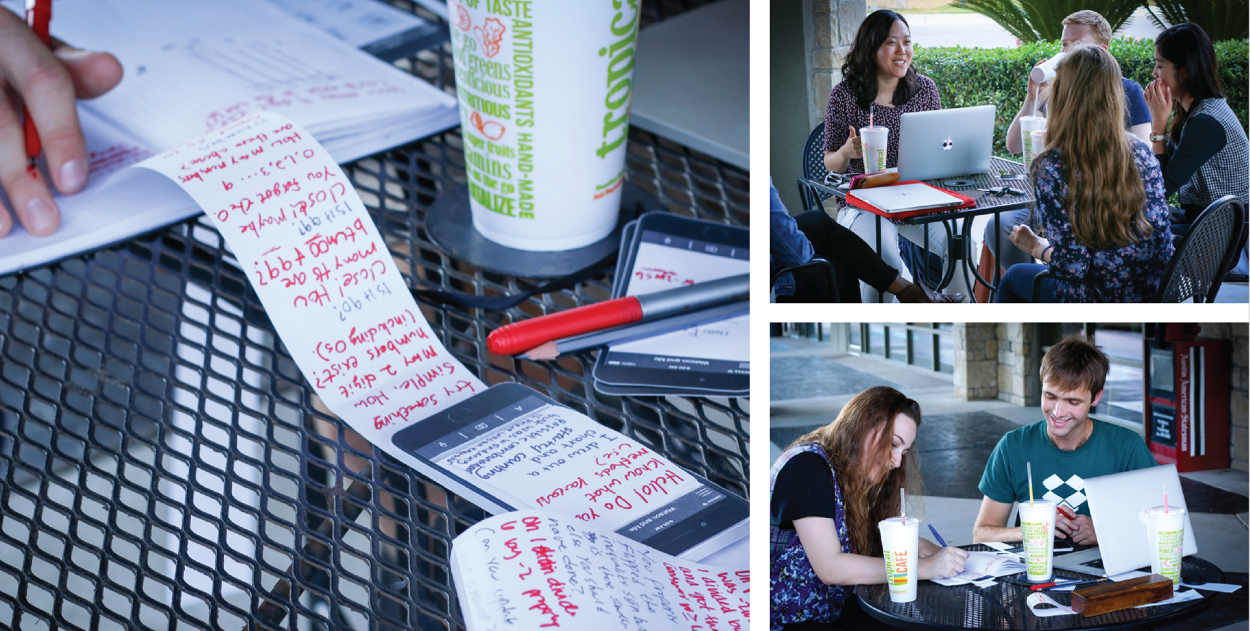 Prototyping with the Watson API's was really enjoyable as there was a wider range of possibilities when approaching the UI design. We decided to build a UI around the idea of a conversation, where a user would enter their problem via text or speech and then Watson would reply back. It was important to follow our design principles and not make Watson into a super calculator but rather a tutor, who would guide and encourage a student to solve the problem themselves.

For our initial prototypes we used a math problem as a basis to show how Watson could guide a student. First, a student would enter the math problem, and then Watson would identify where they went wrong. Highlighting where they went wrong, Watson would find similar problems and relevant coursework to guide the student through the problem step-by-step.

Through our research we knew it was important to make the application engaging for a student. Earlier we had found that students like Carlos, often have hobbies or interests they find more engaging than school subjects. We wanted to use Watson personality insights and learning to incorporate the interests of students and engage the user, like using music to relate to maths or video games to relate to history.

We built our first prototypes on paper so we could flesh out the back and forth conversation style UI, we later used these to test with students. We tested students using a math problem and let them write their solution on the paper or say it out loud to us, we then responded with some guidance to try and help them solve the problem. This was essential to see the guidance experience first hand and make sure we were addressing the user's needs.

Users found the Watson tutor approach to be really enjoyable and intriguing. Through testing we were able to hone the UI and user experience to create an improved digital prototype.

Final prototype designs are under NDA.

We demoed our final prototype and presented our research to our stakeholders at the end of the five week project period. They were incredibly enthusiastic about the research results and prototype, overall the project was a huge success. Our stakeholders were able to see the value and potential that our prototype and use cases could bring, so they decided to incorporate our findings into their new Watson Education project.

Working on this project was a rewarding experience. Designing with Watson was a huge learning experience that challenged my skill set and allowed me to explore new aspects of user experience design. I was really pleased with our final MVP product, the team worked tirelessly over the five weeks and to see our research be so well received was a great feeling. I am looking forward to working with cognitive computing in the future and seeing how it can provide better user experiences.